#43 – The Evolution of the Entrepreneurial Spirit Frederick was born an entrepreneur. He launched and sold his first business at the age of 19 while on active duty in the Air Force. After an honorable discharge in 2005, he went on to build and sell his second business. Although his entrepreneurial spirit often led him to new opportunities, his ambition took him down the wrong path: At the age of 23, he was sent to federal prison for the illegal distribution of marijuana. It was this experience that motivated him to build a solution that would positively impact the lives of people who were being overlooked: his fellow inmates and their families.

This is where the idea of Pigeonly was born. Frederick launched Pigeonly in 2012 to make it easy for his subscribers to connect with their incarcerated loved ones in just a few simple clicks. One of their most successful and notable products is a low-cost phone solution for notoriously expensive prison phone calls, and another is the ability to easily send any printed letters, postcards, articles, etc. to inmates through the mail.

With Fredrick’s leadership, Pigeonly has become one of the largest independent inmate service providers in the country. Subscribers in over 88 countries and growing, Pigeonly reduces recidivism by keeping families connected while helping them save millions in these predatory fees every single year.

In this episode, we dive into Frederick’s backstory, the origin and inspiration for Pigeonly, tips for the early stages of business development, and Frederick’s leadership and professional growth and what it’s meant for Pigeonly’s success.

“That’s when I first noticed it’s not necessarily lack of opportunity. It’s more so lack of preparation and willingness to keep yourself in a state where you can take advantage of opportunities. At least from what I have experienced, there is no shortage of opportunities. They keep coming, back to back, but you can’t act on it, or you don’t know what to do defined enough.” –Frederick Hutson Life Lessons & Strategies for Social Change with Amanda Tattersall of Sydney Policy Lab & Host of the Changemakers PodcastBonus Material: Download the Companion for this EpisodeSubscribe:manda Tattersall’s grandmother’s father was killed... The Power of Philanthropy in Business: 2,700+ Businesses on a Mission to Create a World Full of Giving with Masami Sato, Founder & CEO of B1G1

The Power of Philanthropy in Business: 2,700+ Businesses on a Mission to Create a World Full of Giving with Masami Sato, Founder & CEO of B1G1Bonus Material: Download the Companion for this EpisodeSubscribe:oday, we are talking about the power of... A Case Study in Regenerative Business with Caroline Duell, Founder & CEO of All Good ProductsBonus Material: Download the Companion for this EpisodeSubscribe:orking as a climbing guide and a massage therapist with a background in herbal medicine,... The Global Water Crisis: How to Provide Access to Clean Water Around the World with James Leitner, Founder & Executive Director of MissionCleanWater

The Global Water Crisis: How to Provide Access to Clean Water Around the Worldwith James Leitner, Founder & Executive Director of MissionCleanWater Bonus Material: Download the Companion for this EpisodeSubscribe:  Not having ever been a member of a community... What is Storytelling & Why is it So Important for Social Entrepreneurs? With Adam Force, Co-Founder of Change Creator

What is Storytelling & Why is it So Important for Social Entrepreneurs? with Adam Force, Co-Founder of Change CreatorBonus Material: Download the Companion for this EpisodeSubscribe:Subscribe:fter having worked for WebMD as the director of... How Social Enterprises Can Scale Impact Through Corporate Partnerships with Mark Horoszowski, CEO & Co-Founder of MovingWorlds 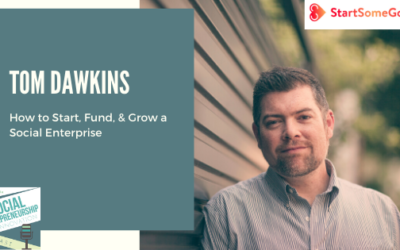