A Sustainable Vision for the 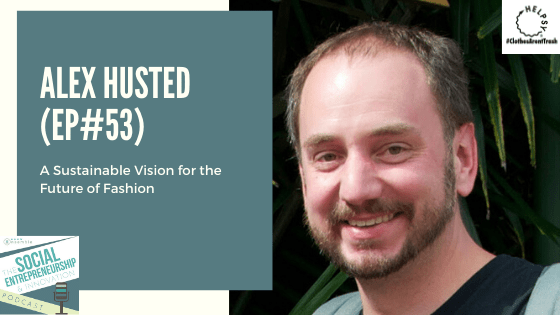 Have you ever wondered what to do with old clothes? Alex Husted has.

Alex Husted is the founder and CEO of Helpsy, a B Corp with a mission to reduce textile waste by helping people easily recycle their used clothing. They’ve saved over 25 million pounds of clothes and shoes from being thrown into a landfill in the last year alone.

Helpsy was founded in 2017 by Alex and his two childhood best friends who were interested in a career pivot. They weren’t sure what industry to develop a business in, but they did all have one key goal in mind: founding a business that addressed the triple bottom line, as they were interested in social entrepreneurship.

When an email came across Alex’s desk about a used clothing business that was on the market, that and two more acquisitions were made and Helpsy was born. Helpsy is already the #1 largest textile collection company in the Northeastern U.S., even now partnering with the city of Boston to determine how textile waste can be addressed in the city’s zero waste plan. Alex only hopes that Boston will lead the way, creating a domino effect that will cause other cities to look at how they can do the same thing.

In this episode, we discuss the need to move on from fast fashion and create a more sustainable future for the clothing and textile industry–and how Helpsy has been working to champion that cause. We also go in-depth on the values of joining the B-Corp community, and how rigorous but rewarding the process of certification can be. Alex and Helpsy have created the only certified B-Corporation currently in the used clothing business.

Want more episodes on innovative companies reducing waste in their industries? Listen to:

People think, “I don’t want this. Why would anyone else want it? I never want to see these jeans again. Why would anybody want this pair of jeans? This is not true” –Alex Husted A look inside one of the Helpsy warehouses where they process 30,000-35,000 lbs of clothes and shoes a day