How Many Refugees are There in the World & Where are They Coming From? Do you ever wonder why someone would leave their home country to ask another to take them in? Do you wonder why they don’t use political or social means to address domestic issues they face at home?

Most of us cannot begin to understand the plight of refugees. But, despite not being able to even imagine their experience, we can learn more about it and use that information to inform our action.

A broad understanding of the conditions that are causing refugees to flee their countries provides a backdrop for the responsibilities and obligations of the global community. Small insights into the experiences of the people forced to flee their homes make more clear the lack of choice they have and the limitations these individuals have to address these problems on their own.

*This article is the second of a four-part series discussing the global refugee crisis. If you missed the first article, “What is a Refugee?,” you can find that here.*

How Many Refugees are There?

There are currently 25.4 million people with refugee status globally. This number does not count the 3.1 million asylum-seekers or the over 40 million internally displaced people in the world. All together, that is 68.5 million people in the world forced from their homes, according to the UN Refugee Agency (UNHCR). The refugee population alone is only 3.3 million less than the total population of Texas—the second most populated state in the U.S.

In 2017—two years ago—the United Nations Under-Secretary-General for Humanitarian Affairs and Emergency Relief Coordinator warned that the world faced the worst humanitarian crisis since World War II. The UN official warned that without a collective effort from the global community to provide for our refugees, they will, in remarkable numbers, starve amidst widespread famine or suffer from diseases such as cholera. Since these statements were made, the refugee crisis has continued to intensify.

The UNHCR “Global Trends at a Glance” provides comprehensive facts and statistics on the crisis around the world. Where are Refugees Coming From?

The vast majority of refugees are coming from only a handful of countries. According to the most recent UN High Commissioner for Refugees, over half of all refugees come from only three countries: Syria, Afghanistan, South Sudan. A brief introduction into the state of affairs in these countries, as well as a few others, can shed light on the severity of the need for a global response and our responsibility to provide one.

Syria’s civil war alone has created more than 5–6 million refugees. Some of these refugees reside in refugee camps, while others seek asylum in foreign countries; Many reside in nearby countries like Lebanon, Jordan, and Iraq (with millions of Iraqi citizens themselves forced to leave their homes because of enduring violence in their country).

Amidst the political and economic motivators of each of the war’s participants are the non-fighting citizens of Syria who are caught in the middle of the violence, with no option but to flee if possible. The United Nations Human Rights Council reported, “One of the most vicious patterns of the Syrian conflict is the targeting of schools, with attacks in the Syrian Arab Republic estimated to account for half of all worldwide attacks on schools from 2011 to 2015.”

To describe the reported experiences of Syrian refugees and the civilians trapped in the violence within their country as devastating is an understatement. Compounding the indiscriminate bombing, kidnappings, and torture, there are very few resources left to assist with the resulting human wreckage. Medical facilities and humanitarian relief efforts have also been the target of bombings. The number of medical personnel left in the country is vastly inadequate for its needs.

Click here for an interesting look at the once beautiful and bustling city of Aleppo. Afghanistan accounts for 2 and a half million of the world’s refugees.  The unrest in Afghanistan stems from a long history of conflict and international intervention.  Terrorist organizations like Al-Qaeda and the Taliban rooted themselves in Afghanistan, contributing to the country continuing on the receiving end of devastating Western war efforts—including the United States and the British, especially after 9/11 at which time Western war efforts left 7.5 million Afghan civilians threatened by starvation.  Between the violence from Western war departments as well as embattled terrorist organizations and internal conflicts are Afghan citizens. With this enduring violence in Afghanistan, “more than 32,000 civilians [have been] killed and around 60,000 injured in a decade.” The civilians are left with nowhere to turn as more are killed by Afghan and American forces than by the Taliban.

South Sudan became one of the world’s newest countries when southern Sudan overwhelmingly voted to separate from Sudan after forty years of war between the north and the south.  Despite having abundant natural resources, a corrupt government and lingering humanitarian needs plague the new country.  South Sudan is now the home country of over 2 million refugees; the largest refugee crisis in Africa and the fastest growing refugee crisis in the world.  In addition to the 2 million South Sudanese people who have fled their country, over 2 million people have been internally displaced, but remain within South Sudan’s borders.  Refugees in South Sudan are fleeing violence from the six-year civil war, a devastating drought, and the resulting scarcity of food supplies.

The majority of South Sudanese refugees are women and children, fleeing abuse and violence.  The experiences of these refugees in their home countries leave no option but to flee.  Refugees flee their homes escaping as their home villages are pillaged by armed militias. Many are escaping the most horrific circumstances, experiencing unimaginable trauma along the way.

Since 2017, military action against ethnic minorities in Myanmar has caused extensive internal displacement. One group in particular with heightened, institutional oppression is the Rohingya people—a minority ethnic group from Myanmar that has been denied any recognition of Burmese citizenship and, therefore receives no legal protections or access to any legal system in the country (a stateless ethnic group).  The military in Myanmar began an ethnic cleansing of the Rohingya people, conducting mass killings, rapes, torture, and forced starvation, amounting to a genocide against the Rohingya.  This has led over 727,000 Rohingya people to flee Myanmar for Bangladesh. The UN Security Council General described the situation as “the world’s fastest-developing refugee emergency and a humanitarian and human rights nightmare.”

Without legal recourse available, the Rohingya people have no hope for justice in their country.  Instead, reports from escaped Rohingya refugees describe unspeakable atrocities they have experienced and witnessed that led them to Bangladesh.  Potentially compounding their devastation is the threat of natural disasters. Heavy rainfall could cause landslides creating a host of sanitation and health problems for the Rohingya people who have found refuge in Bangladesh. Despite the efforts of Bangladesh, the Rohingya people are in much need of humanitarian assistance from the international community.

Over 870,000 refugees have fled from Somalia with an additional estimated 2.1 million displaced within the country.  This violence is not new, as Somalia has suffered human rights crises for the last twenty years.  There, war wages between Al-Shabab, government security forces, various political and social militias, and international interveners. Civilians sit in the middle of the fighting with indiscriminate bombings, illegitimate imprisonment and extra judicial executions, sexual violence, and torture.

While the countries listed above account for the majority of refugee people, millions are fleeing from other countries as well—millions of additional refugees seek international protection as they flee other countries in the middle east like Yemen and Palestine, and African countries like the Democratic Republic of the Congo and the Central African Republic.

Refugees undertake dangerous journeys to find safety for themselves and their families. For example, more than 1.4 million people seek refuge in Greece, Italy, and Spain have boarded boats to travel overseas for protection since 2015. More than 1,500 migrants have died attempting the overseas journey across the  Mediterranean. In the first 5 months of 2019, almost 430 people are suspected to have drowned seeking safety in Europe.

Closer to the United States, millions of civilians from Latin America are also displaced with similar stories of devastation and violence. Citizens from Columbia, Guatemala, Venezuela, Honduras, and El Salvador are in need of humanitarian efforts as they flee violence in their home countries.

With a small introduction into the tragic circumstances that force these people from their homes, a border policy of fear and avoidance from the wealthiest country in the world seems indisputably misinformed and inhumane. It isn’t necessary to drown ourselves in the stories of struggle of every person around the world in order to understand the gravity of the situation— even slight exposure to their experiences provides invaluable perspective as we determine how to help. More From Our Blog & Podcast… 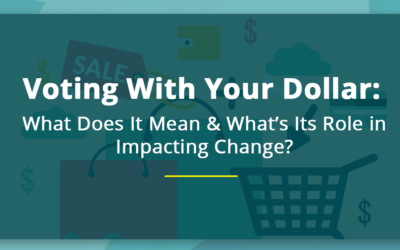 Voting with Your Dollar: What Does It Mean & What’s Its Role in Impacting Change?

Voting With Your Dollar: What Does It Mean & What’s Its Role in Impacting Change?Want the audio version of this post? Listen here:Subscribe:So what does it mean to vote with your dollar? One of the biggest impediments to effecting change through daily action is... Aspiration Bank Reviews it too much to ask to have a bank that doesn’t steal your money or exploit your trust for its own profit? Aspiration Bank burst on the scene in 2018 to make it clear that no, it is not. And it’s only natural to be suspicious... #102 – What is Storytelling & Why is it So Important for Social Entrepreneurs? With Adam Force, Co-Founder of Change Creator

What is Storytelling & Why is it So Important for Social Entrepreneurs? with Adam Force, Co-Founder of Change CreatorBonus Material: Download the Companion for this EpisodeSubscribe: After having worked for WebMD as the director of strategic marketing for ten...

The Social Entrepreneur’s Book List: Getting Introduced, Inspired, and Started in the World of Change-Making (2020)

The Social Entrepreneur’s Book List: Introduced, Inspired, and Started in the World of Change-Making (2020)Want the audio that goes with this post? Listen here:Subscribe:hat’s better than a new book, right?  Maybe a new book that also challenges... #101 – How Social Enterprises Can Scale Impact Through Corporate Partnerships with Mark Horoszowski, CEO & Co-Founder of MovingWorlds The Best Eco Friendly Toothbrush: Keep Your Teeth and the Planet Sparkling Clean

The Best Eco Friendly Toothbrush: Keep Your Teeth and the Planet Sparkling Cleanrushing our teeth—we all do it at least twice a day (if we are all following the dentist’s orders, that is). It’s such an integral part of our everyday, that a...